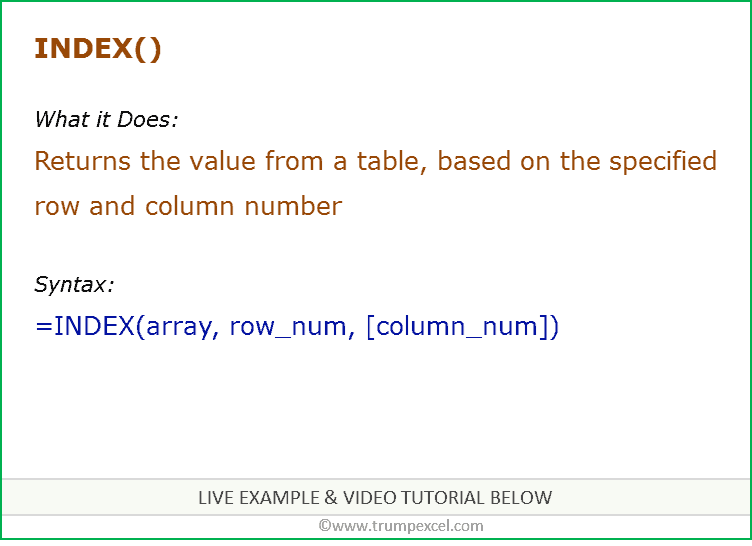 When to use Excel INDEX Function

It returns the value from a table for the specified row number and column number.

INDEX function has 2 syntax. The first one is used in most cases, however, in case of three-way lookups, the second one is used (covered in Example 5).

To find Tom’s marks in Physics, use the below formula:

This INDEX formula specifies the array as $B$3:$E$10 which has the marks for all the subjects. Then it uses the row number (3) and column number (2) to fetch Tom’s marks in Physics.

It may not always be possible to specify the row number and the column number manually. You may have a huge data set, or you may want to make it dynamic so that it automatically identifies the name and/or subject specified in cells and give the correct result.

This can be done using a combination of the INDEX and the MATCH function.

Here is the formula that will make the lookup values dynamic:

In the above formula, instead of hard-coding the row number and the column number, MATCH function is used to make it dynamic.

In the above example, we have to manually enter the data. That could be time-consuming and error-prone, especially if you have a huge list of lookup values.

A good idea in such cases is to create a drop down list of the lookup values (in this case, it could be student names and subjects) and then simply choose from the list. Based on the selection, the formula would automatically update the result.

This makes a good dashboard component as you can have a huge data set with hundreds of students at the back end, but the end user (let’s say a teacher) can quickly get the marks of a student in a subject by simply making the selections from the drop down.

How to make this:

The formula used in this case is the same used in Example 2.

The lookup values have been converted into drop-down lists.

Here are the steps to create the Excel drop down list:

Now you’ll have the drop-down list in cell G5. Similarly, you can create one in H4 for the subjects.

In the above examples, we’ve used Excel INDEX function to do a 2-way lookup and get a single value.

Now, what if you want to get all the marks of a student. This can enable you to find the maximum/minimum score of that student, or the total marks scored in all subjects.

In simple English, you want to first get the entire row of scores for a student (let’s say Bob) and then within those values identify the highest score or the total of all the scores.

Here is the trick.

In Excel INDEX Function, when you enter the column number as 0, it will return the values of that entire row.

So the formula for this would be:

If you select the formula in the edit mode and press F9, you’ll be able to see the array it returns (as shown below):

Now to calculate the total score obtained by Tom, we can simply use the above formula within the SUM function.

What is a three-way lookup?

In the above examples, we’ve used one table with scores for students in different subjects. This is an example of a two-way lookup as we use two variables to fetch the score (student’s name and the subject).

Now, suppose in a year, a student has three different levels of exams, Unit Test, Midterm, and Final Examination (that’s what I had when I was a student).

Here is an example of a three-way lookup:

In the example above, apart from selecting the student’s name and subject name, you can also select the level of exam. Based on the level of exam, it returns the matching value from one of the three tables.

Here is the formula used in cell H4:

Let’s break down this formula to understand how it works.

This formula takes four arguments. INDEX is one of those functions in Excel that has more than one syntax.

So far in all the example above, we have used the first syntax, but to do a three-way lookup, we need to use the second syntax.

Now let’s see each part of the formula based on the second syntax.

This is one wild use of the Excel INDEX function.

I have a list of names as shown below:

Now I can use a simple INDEX function to get the last name on the list.

This function simply counts the number of cells that are not empty and returns the last item from this list (it works only when there are no blanks in the list).

Now, what here comes the magic.

You would expect the above formula to return =A2:”Josh” (where Josh is the last value in the list). However, it returns =A2:A9 and hence you get an array of names as shown below:

One practical example where this technique can be helpful is in creating dynamic named ranges.

That’s it in this tutorial. I’ve tried to cover major examples of using the Excel INDEX function. If you would like to see more examples added to this list, let me know in the comments section.

Note: I’ve tried my best to proof read this tutorial, but in case you find any errors or spelling mistakes, please let me know 🙂