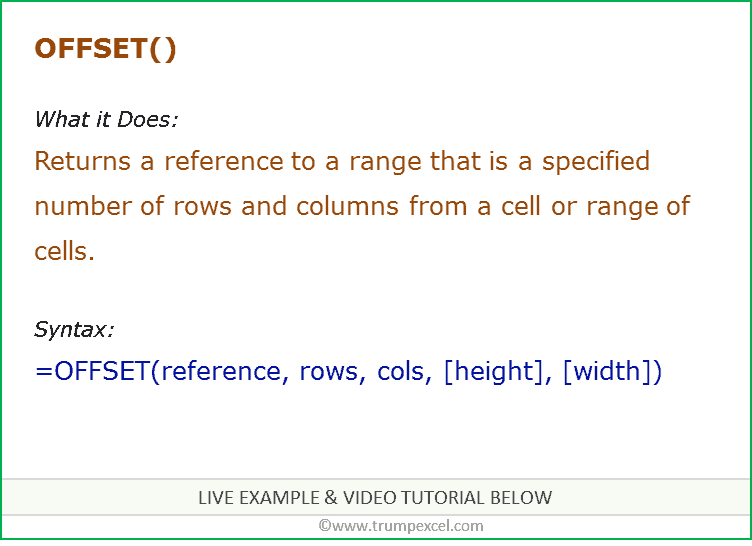 When to use Excel OFFSET Function

Excel OFFSET function can be used when you want to get a reference which offsets specified number of rows and columns from the starting point.

It returns the reference that OFFSET function points to.

Excel OFFSET function is possibly one of the most confusing functions in Excel.

Let’s take a simple example of a Chess game. There is a piece in Chess called a Rook (also known as a tower, marquess, or rector).

Now, as all the other Chess pieces, a Rook has a fixed path on which it can move around on the board. It can go straight (to the right/left or up/down the board), but it can not go diagonally.

For example, suppose we have a chess board in Excel (as shown below), in a given box (D5 in this case), the Rook can only go in the four highlighted directions. 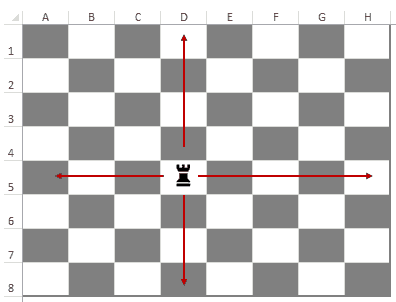 Now if I ask you to take the Rook from it’s current position to the one highlighted in yellow, what will you tell the rook? 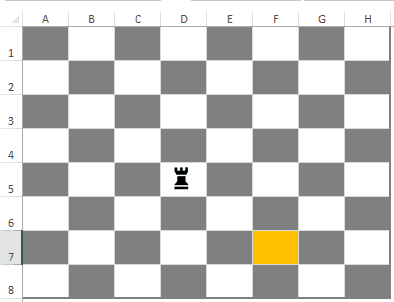 You’ll ask it to take two steps downwards and two steps to the right.. isn’t it?

And that’s a close proximation of how the OFFSET function works.

Now let’s see what this means in Excel. I want to start with the cell D5 (which is where the Rook is) and then go two rows down and two columns to the right and fetch the value from the cell there.

The formula would be:
=OFFSET(from where to begin, how many rows down, how many columns to the right) 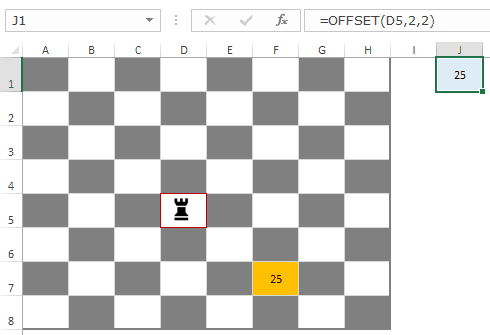 It started at D5, and then went two rows down and two columns to the right and reached the cell F7. It then returned the value in cell F7.

In the above example, we looked at the OFFSET function with 3 arguments. But there are two more optional arguments that can be used. 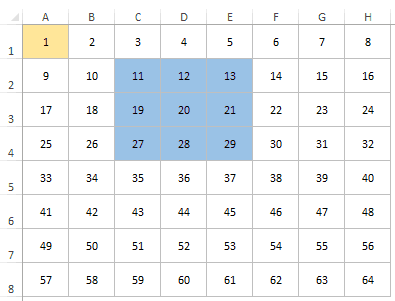 Suppose you want to use the reference to cell A1 (in yellow) and you want to refer to the entire range highlighted in blue (C2:E4) in a formula.

How would you do that using a keyboard? You would first go to cell C2, and then select all the cells in C2:E4.

Now let’s see how to do this using the OFFSET formula:

If you use this formula in a cell, it will return a #VALUE! error, but if you get into the edit mode and select the formula and press F9, you’ll see that it returns all the values that are highlighted in blue.

Now that you have the reference to a range of cells (C2:E4), you can use it within other function (such as SUM, COUNT, MAX, AVERAGE).

Example 1 – Finding the Last Filled Cell in the Column

Suppose you have some data in a column as shown below:

To find the last cell in the column, use the following formula:

This formula assumes that there are no values apart from the ones shown and these cells do not have a blank cell in it. It works by counting the total number of cells that are filled, and offsets the cell A1 accordingly.

For example, it this case, there are 8 values, so COUNT(A:A) returns 8. We Offset the cell A1 by 7 to get the last value.

Example 2 – Creating a Dynamic Drop Down

You can extend the concept shows in Example 1 to create dynamic named ranges. These could be useful if you are using the named ranges in formulas or in creating drop-downs and you are likely to add/delete data from the reference that makes the named range.

Here is an example:

Note that the drop down adjusts automatically when the year is added or removed.

This happens as the formula that is used to create the drop down is dynamic and identifies any addition or deletion and adjusts the range accordingly.

Let see how this formula works:

Due to some of the limitations of Excel OFFSET function, you many want to consider alternatives to it: