Excel already has a TRIM worksheet function that you can use to get rid of leading, trailing, and extra spaces in between words/strings.

There is a TRIM function in VBA as well (and it does exactly the same thing – remove extra spaces).

Why do we need a TRIM function in VBA too?

While you can work with the inbuilt TRIM function in Excel worksheets to get rid of spaces. in some cases, you may need to do this using VBA.

This could be as a part of a bigger code.

Syntax of the VBA TRIM function

Let’s learn how to use the VBA TRIM function with a couple of examples.

Suppose you have the following text in cell A1

Note that there are spaces before and after the sentence.

The below code would take this sentence, and show the result after trimming the extra spaces 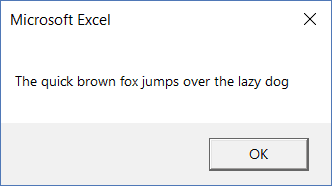 For example, suppose you have the following text in cell A1 (with extra spaces in between words):

If I use the above VBA code, it will show a message box as shown below: 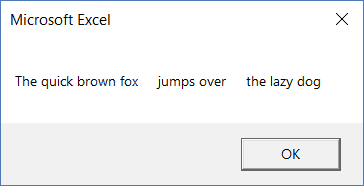 As you can see in the message box result, the extra spaces between words are not removed by the VBA TRIM function.

Then what’s the alternative?

If you want to remove leading, trailing, as well as double spaces in between words, it’s better to use the following code:

Note: VBA Trim function does not remove the non-whitespace characters – such as newlines (vbNewLine, vbCrLf) etc.

Suppose you have a data set as shown below where there are leading and trailing spaces:

You can use the below code to instantly clean this data and remove all the leading and trailing spaces:

The above code goes through all the cells in the selection and removes the leading and trailing spaces.