Leading and trailing spaces in Excel often leads to a lot of frustration. I can’t think of a situation where you may need these extra spaces, but it often finds its way into the excel spreadsheets.

There are many ways you can end up with these extra spaces – for example, as a part of the data download from a database, while copying data from a text document, or entered manually by mistake.

Leading, trailing, or double space between text could lead to a lot of serious issues.

For example, suppose you have a data set as shown below: 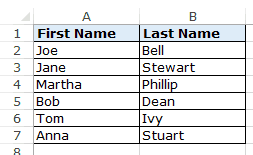 Now have a look at what happens when I use a VLOOKUP function to get the last name using the first name.

You might not be able to spot the difference with the naked eye that there is an extra trailing space in the name that is causing this error.

In this example, it was easy to spot the issue in such a small data set, but imagine having to check this for thousands of records.

To be on the safe side, it is always a good idea to clean your data and remove spaces in Excel.

How to Remove Spaces in Excel

In this tutorial, I will show you two ways to remove spaces in Excel.

For example, in the above example, to remove spaces from the entire list if first names (in A2:A7), use the following formula in cell C1 and drag it down for all the first names:

Excel TRIM function would instantly remove all the leading and trailing spaces in the cell.

Once you have the cleaned data, copy it paste it as values in place of the original data.

If you have some text in cell A1 from which you want to remove spaces, use the below formula:


You can remove spaces in Excel using the Find and Replace functionality.

This is a faster technique and can be useful in the given situations:

Note that this technique cannot be used to remove leading or trailing spaces. It will find and replace double spaces irrespective of its position.

This will replace all the double spaces with a single space character.

To remove all the space characters in a data set, follow the below steps:

This will remove all the space characters in the selected data set.

Note that in this case, even if there are more than one space characters between two text strings or numbers, all of it would be removed.

You can also use Find and Replace to quickly remove line breaks.

This will instantly remove all the line breaks from the data set that you selected.

Based on your situation, you can choose either method (formula or find and replace) to remove spaces in Excel.