Yesterday, I got an email from one of my readers – June.

She wanted to know how to apply bold font format to a specific part of a string within a cell. For example, apply the bold format to only the word ‘Hello’ from ‘Hello World’.

And she wanted to do this for hundreds of cell at once.

Since there is no inbuilt functionality in Excel that can do that, I created a simple macro that uses the Excel VBA InStr function (you will see how to do this in Example 4 in this tutorial).

In this tutorial, I will explain the usage of InStr function in Excel VBA and see some practical examples where it can be used.

InStr function finds the position of a specified substring within the string and returns the first position of its occurrence.

For example, if you want to find the position of ‘x’ in ‘Excel’, using the Excel VBA InStr function would return 2.

Example 1 – Finding the Position from the beginning

In this example, I will use the InStr function to find the position of ‘V’ in ‘Excel VBA’ from the beginning.

The code for this would be:

When you run this code, it will show a message box with the value 7, which is the position of ‘V’ in the string ‘Excel VBA’.

Suppose, I want to find the position of ‘the’ in the sentence – ‘The quick brown fox jumps over the lazy dog’

However, I want the search to begin with the second word onwards.

In this case, we need to change the [Start] argument to make sure it specifies the position from where the second word starts.

Here is the code that will do this:

This code will show the message box with the value 32 as we have specified the starting position as 4. Hence it ignores the first ‘The’ and finds the second ‘the’ in the sentence.

If you want to make it more dynamic, you can enhance the code so that it automatically ignore the first word.

Here is the enhanced code that will do this:

This code first finds the position of a space character and stores it in the variable StartingPosition.

It then uses this variable as the starting position to look for the word ‘the’.

Hence it returns 32 (which is the starting position of ‘the’ after the first word).

Example 3 – Finding the Position of @ in Email Address

You can easily create a custom function to find the position of @ in an email address using the Excel VBA InStr function.

Here is the code to create the custom function:

Now you can use this custom function as any other worksheet function. It will take a cell reference as input and give you the position of @ in it.

Similarly, you can create a custom function to find the position of any substring within the main string.

Example 4 – Highlighting a Part of String within Cells

This is the query that was asked by June (my reader who also inspired me to write this tutorial).

Here is a sample data in the format June sent me: 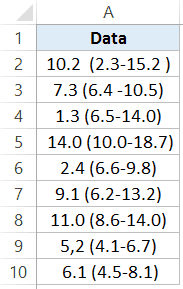 Her query was to make the numbers outside the bracket bold.

Here is the code I created that does this:

The above code uses the For Each loop to go through each of the cells in the selection. It identifies the position of the opening bracket character using the InStr function. It then changes the font of the text before the bracket.

To use this code, you need to copy and paste in a module in the VB editor.

Once you have copy pasted the code, select the cells in which you want to do this formatting and run the macro (as shown below).

You May Also Like the following Excel VBA Tutorials: