Excel already has a couple of ways to sort data quickly.

You can easily sort a data set by using the sort icons in the ribbon or the sort dialog box.

Then why do you need to know how to do this using VBA?

Knowing how to sort data using VBA can be helpful when included as a part of your code. For example, suppose you get a data set daily/weekly that you need to format and sort in a specific order.

You can create a macro to do all this for you with a single click. That will save you a lot of time and effort every time you do it.

Also, if you create Excel dashboards, you can take Excel sorting capability to a new level by allowing the user to sort the data just by double-clicking on the header (as shown below).

I will cover how to create this later in this tutorial. Let’s first quickly get the basics straight.

When sorting using VBA, you need to use the Range.Sort method in your code.

With the sort method, you need to provide some additional information through parameters. Below are the key parameters you need to know:

While these three suffices in most of the cases, you can read more about the parameters in this article.

Now let’s see how to use the Range.Sort method in VBA to sort data in Excel.

Sorting a Single Column Without Header

Suppose you have a single column without header (as shown below).

You can use the below code to sort it in ascending order.

Note that I have specified the data range manually as Range(“A1:A12”).

In case there might be changes in the data and values might be added/deleted, you can use the below code that automatically adjusts based on the filled cells in the dataset.

This will check the last consecutively filled cell in the column and include it in sorting. In case there are blanks, it will only consider data till the first blank cell.

You can also create a named range and use that named range instead of the cell references. For example, if the named range is DataSet, your code would now be as shown below.

Now let me quickly explain the parameters used in the above examples:

Wondering where to put this VBA code and how to run the macro? Read this tutorial!

Sorting a Single Column With Header

In the previous example, the data set did not have a header.

When your data has headers, you need to specify that in the code so that the sorting can start from the second row of the dataset. 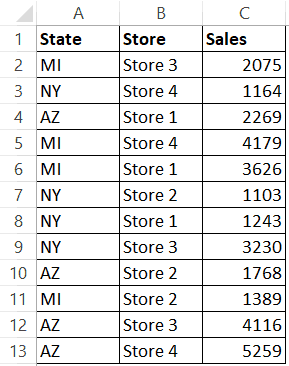 Below is the code that will sort the data in descending order based on the sales of the stores.

Note that I have created a named range – ‘DataRange’, and used this named range in the code.

So far in this tutorial, we have seen how to sort a single column (with and without headers).

Now, what if you want to sort based on multiple columns.

For example, in the below data set, what if I want to first sort by the state code, and then by the store.

Here is the code that will sort multiple columns at one go.

Below is the result that you will get. 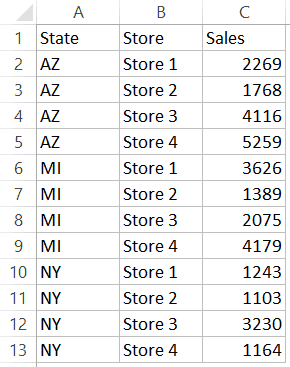 If you’re creating a dashboard or want more ease of use in your reports, you can write a VBA code that will sort the data when you double click on the headers.

Below is the code that will allow you to do this:

Note that I have created a named range (“DataRange”) and have used it in the code instead of using the cell references.

As soon as you double-click on any of the headers, the code disables the usual double-click functionality (which is to get into the edit mode) and uses that cell as the key while sorting the data.

Also note that as of now, this code will sort all the columns in ascending order only.

Note that double-click is a trigger allows Excel to run the specified code. These triggers such as double-click, opening a workbook, adding a new worksheet, changing a cell, etc. are called events and can be used to run macros in Excel. You can read more about Excel VBA events here.

Where to put this code?

You need to paste this code into the code window of the sheet in which you want this double click sort functionality.

Now what if you want to sort the first two columns (‘State’ and ‘Store’) in ascending order, but ‘Sales’ column in descending order.

Here is the code that will do it:

In the above code, it checks if the cell that is double-clicked is the Sales header or not. If yes, then it assigns the xlDescending value to the variable SortOrder, else it makes it xlAscending.

Now let’s take this a notch further and show a visual Marker (arrow and colored cell) in the header when it is sorted.

To get this, I have added a new worksheet and made the following changes in it (you can download the example file and follow along):

Your backend sheet would look something as shown below: 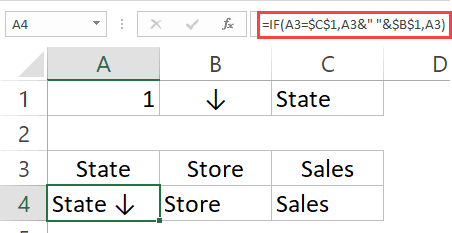 Now you can use the below code to sort the data by double-clicking on the headers. When you double-click on a header, it will automatically get the arrow in the header text. Note that I have also used conditional formatting to highlight the cell as well.

Note that this code works well for the way my data and workbook is constructed. If you change the structure of the data, you will have to modify the code accordingly.