How to do a Multiple Level Data Sorting in Excel

In this tutorial, I cover how to do a multi-level sorting in Excel. You can watch the video below, or you can read the tutorial below it.

When working with data in Excel, sorting the data is one of the common things you might have to do.

In most of the cases, you need to sort a single column.

But in some cases, there may be a need to sort two columns or more than two columns.

For example, in the below dataset, I want to sort the data by the Region column and then by the Sales Column. This will allow me to see which sales rep has done well in which regions. 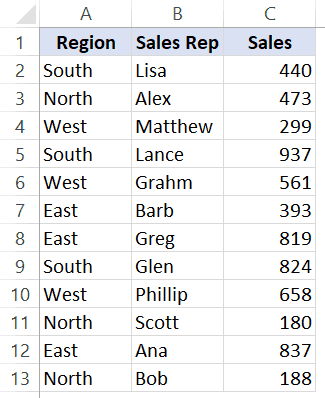 While it’s straightforward to sort data by one column in Excel, when it comes to sorting by two columns, you need to take a couple of additional steps.

In this tutorial, I will show you two ways to do a multiple level data sorting in Excel (i.e., sort by two columns)

When you sort data using the sort dialog box, you get an option to add multiple levels to it.

Here are the steps to do  multi-level sorting using the dialog box: 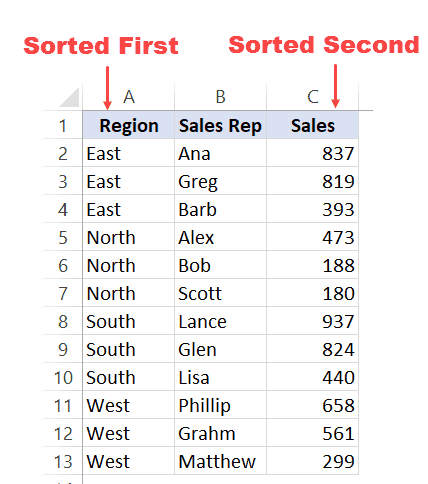 In this example, I have sorted the data for two columns. You can have more than two-column sorting as well. All you need to do is add these sorting levels and specify the details.

Note: While this method is longer and takes a few more steps (as compared with the multi-sorting method covered next), I recommend using this as it is less confusing.

Not many people know this way of doing a multiple level data sorting in Excel.

This technique works the same way with a minor difference – you sort the second level first and then move to the first level sorting column.

Here are the steps to do it:

The above steps would sort the data just like it did in the first method.

While this method works fine, I recommend using the sort dialog bo method.

Sort dialog box makes it less error-prone (as you can see which levels getting sorted in which order).

Also, there are more ways to sort data with the dialog box. For example, you can sort a column based on the cell/font color and you can also use your own custom sorting criteria.