Power Query can be of great help when you want to combine multiple workbooks into one single workbook.

For example, suppose you have the sales data for different regions (East, West, North, and South). You can combine this data from different workbooks into a single worksheet using Power Query.

If you have these workbooks in different locations/folders, it’s a good idea to move all these into a single folder (or create a copy and put that workbook copy in the same folder).

So to begin with, I have four workbooks in a folder (as shown below). 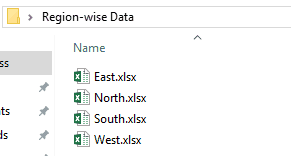 Now, in this tutorial, I am covering three scenarios where you can combine the data from different workbooks using Power Query:

Let’s see how to combine data from these workbooks in each case.

The below technique would work when your Excel Tables has been structured the same way (same column names).

The number of rows in each table can vary.

Don’t worry if some of the Excel Tables have additional columns. You can choose one of the Tables as the template (or as the ‘key’ as Power Query calls it), and Power Query would use it to combine all the other Excel Tables with it.

Now I have four workbooks in a folder that I want to combine.

Below is a snapshot of the table I have in one of the workbooks.

Here are the steps to combine the data from these workbooks into a single workbook (as a single table).

This will load the final result (combined data) into your active worksheet.

Note that along with the data, Power Query automatically adds the workbook name as the first column of the combined data. This helps in keeping track of what data came from which workbook.

In case you want to first Edit the data before loading it into Excel, in Step 6, select ‘Combine and Edit’. This will open the final result in the Power Query editor where you can edit the data.

A few things to know:

Adding New Files to the Folder

Now let’s take a minute and understand what we did with the above steps (which only took us a few seconds).

We combined the data from four different workbooks in one single table in a few seconds without even opening any of the workbooks.

But that’s not all.

The real POWER of Power Query is that now when you add more files to the folder, you don’t need to repeat any of these steps.

All you need to do move the new workbook in the folder, refresh the query, and it will automatically combine the data from all the workbooks in that folder.

For example, in the above example, if I add a new workbook – ‘Mid-West.xlsx’ to the folder, and refresh the query, it will instantly give me the new combined dataset.

Here is how you refresh a query:

Each workbook has the data with the same worksheet name

In case you don’t have the data in an Excel Table, but all the sheet names (from which you want to combine the data) are the same, then you can use the method shown in this section.

There are a few things you need to be cautious about when it’s just tabular data and not an Excel Table.

Now let’s see how to quickly combine data from different workbooks where the worksheet name is the same.

In this example, I have a folder with four files.

In each workbook, I have a worksheet with the name ‘Data’ that contains the data in the following format (note that this is not an Excel Table). 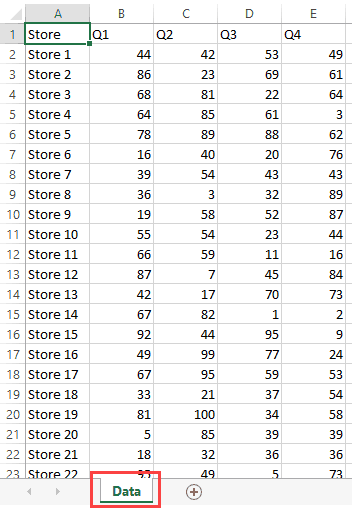 Here are the steps to combine data from multiple workbooks into one single worksheet:

This will load the final result (combined data) into your active worksheet.

In case you want to first Edit the data before loading it into Excel, in Step 6, select ‘Combine and Edit’. This will open the final result in the Power Query editor where you can edit the data.

Sometimes, you may not get structured and consistent data (such as Tables with same name or worksheet with the same name).

For example, suppose you get the data from someone who created these datasets but named the worksheets as East Data, West Data, North Data, and South Data.

Or, the person may have created Excel tables, but with different names.

In such cases, you can still use Power Query, but you need to do it with a couple of additional steps.

Now let me try and quickly explain what we did here. Since there was no consistency in the sheet names or table names, we used the =Excel.Workbook formula to fetch all the objects of the workbooks in the Power Query. These objects can include sheets, tables, and named ranges. Once we had all the objects from all the files, we filtered these to only consider Excel Tables. Then we expanded the data in the tables and combined all these.

In this example, we filtered the data to only use Excel Tables (in Step 13). In case you want to combine sheets and not tables, you can filter sheets.

Note – this technique will give you the combined data even when there is a mismatch in column names. For example, if in East.xlsx, you have a column that has been misspelled, you will end up with 5 columns. Power Query will fill data in columns if it finds it, and if it can not find a column, it will report the value as ‘null’.

Similarly, if you have some additional columns in any of the tables worksheets, these will be included in the final result.

Now if you get more workbooks from which you need to combine data, simply copy-paste it into the folder and refresh the Power Query