How to Use Excel LEN Function (Examples + Video) 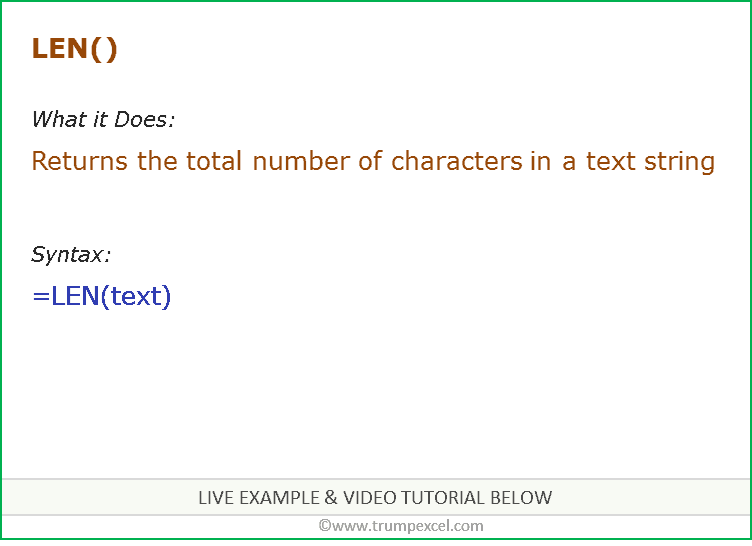 When to use Excel LEN Function

It returns a number that represents the number of characters in the specified string.

Following are some useful examples of using the LEN function in Excel.

Example 1 – To get the Length of a Text String

If you have some text in cell A1 and you want to quickly know the total number of characters in it, you can use the following function:

In the above example, there are a total of 43 characters – including spaces.

Sometimes, you may get a dataset that has extra spaces in between words or at the beginning/ending of the text string. In such cases, if you use the LEN function, it will also count the number of spaces.

To avoid this to happen, you can use LEN function along with the TRIM function.

Below is an example where you can see that while the text looks the same, the result of LEN function is different in each case as there are trailing spaces in it.

The following formula will get rid of any extra spaces as well as leading/trailing spaces:

In the above example, while the trailing spaces are still there is A2 and A3, but since we have used TRIM, it removes these spaces before the length of the text is counted by the LEN function.

Example 3 – Counting the Number of Words in a Sentence

You can use the LEN function to count the number of words in a text string.

For example, in the text – “Good Morning”, there is one space and two words.

Below is the formula that will give the word count:

The above formula counts:

It then subtracts these two to get the number of spaces, and then add 1 to it.

Note that you need to use TRIM in the first part of the formula to make sure any extra spaces are not counted (only the single spaces between words).