In this tutorial, you’ll learn how to find the position of the last occurrence of a character in a string in Excel.

A few days ago, a colleague came up with this problem.

He had a list of URLs as shown below, and he needed to extract all the characters after the last forward slash (“/”).

So for example, from https://example.com/archive/January he had to extract ‘January’. 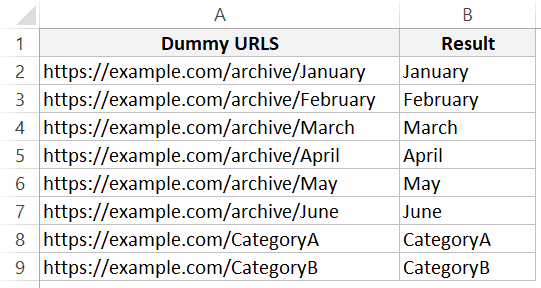 It would have been really easy has there been only one forward slash in the URLs.

What he had was a huge list of thousands on URLs of varying length and a varying number of forward-slashes.

In such cases, the trick is to find the position of the last occurrence of the forward slash in the URL.

In this tutorial, I will show you two ways to do this:

Getting the Last Position of a Character using Excel Formula

When you have the position of the last occurrence, you can simply extract anything on the right of it using the RIGHT function.

Here is the formula that would find the last position of a forward slash and extract all the text to the right of it.

Let ‘s break down the formula and explain how each part of it works.

Getting the Last Position of a Character using Custom Function (VBA)

While the above formula is great and works like a charm, it’s a bit complicated.

If you’re comfortable using VBA, you can use a custom function (also called a User Defined Function) created via VBA. This can simplify the formula and can save time if you have to do this often.

Let’s use the same data set of URLs (as shown below):

For this case, I have created a function called LastPosition, that find the last position of the specified character (which is a forward slash in this case). 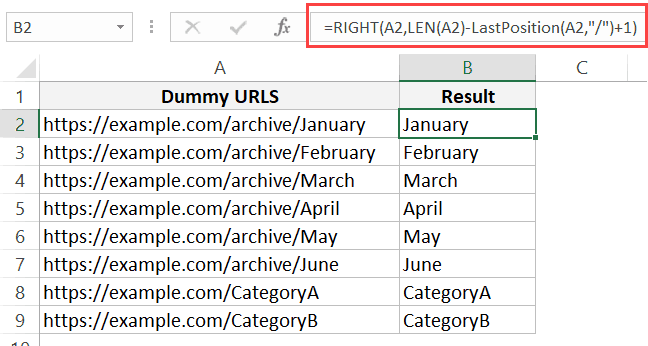 You can see that this is a lot simpler than the one we used above.

Here is how this works:

Here is the VBA code that created this function:

Here are the steps to copy and paste this code in the VB back-end:

Here are the steps to place this code in the VB Editor:

Now the formula would be available in all the worksheets of the workbook.

Note that you need to save the workbook as the .XLSM format as it has a macro in it. Also, if you want this formula to be available in all the workbooks you use, you can either save it the Personal Macro Workbook or create an add-in from it.