How to make VLOOKUP Case Sensitive

Suppose you have the data as shown below: 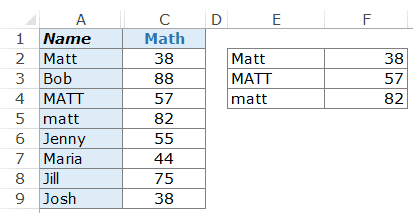 As you can see, there are three cells with the same name (A2, A4, and A5) but with a different letter case. On the right (in E2:F4), we have the three names (Matt, MATT, and matt) along with their scores in Math.

Excel VLOOKUP function is not equipped to handle case-sensitive lookup values. In this above example, no matter what lookup value case is (Matt, MATT, or matt), it’ll always return 38 (which is the first matching value).

In this tutorial, you’ll learn how to make VLOOKUP case sensitive by:

A helper column can be used to get unique lookup value for each item in the lookup array. That helps in differentiating between names with different letter case.

Note: Since this is an array formula, use Control + Shift + Enter instead of just enter.

Let’s break down the formula to understand how it works:

Note: You can insert the helper column anywhere in the data set. Just make sure it is to the left of the column from where you want to fetch the data. You need to then adjust the column number in the VLOOKUP function accordingly.

Even when you don’t want to use the helper column, you still need to have a virtual helper column. This virtual column is not a part of the worksheet but is constructed within the formula (as shown below).

Here is the formula that’ll give you the result without the helper column:

The formula also uses the concept of a helper column. The difference is that instead of putting the helper column in the worksheet, consider it as virtual helper data that is a part of the formula.

Here is the part that works as the helper data (highlighted in orange):

Let me show you what I mean by virtual helper data.

In the above illustration, as I select the CHOOSE part of the formula and press F9, it shows the result that the CHOOSE formula would give.

It’s an array where a comma represents next cell in the same row and semicolon represents that the following data is in the next row. Hence, this formula creates 2 columns of data – One column has the row number and one has the math score.

Now, when you use the VLOOKUP function, it simply looks for the lookup value in the first column (of this virtual 2 column data) and returns the corresponding score. The lookup value here is a number that we get from the combination of MAX and EXACT function.

Is there any other way you know to do this? If yes, do share with me in the comments section.

7 thoughts on “How to make VLOOKUP Case Sensitive”