How to Count Cells that Contain Text Strings

Watch Video – How to Count Cells that Contain Text Strings

Counting is one of the most common tasks people do in Excel. It’s one of the metric that is often used to summarize the data. For example, count sales done by Bob, or sales more than 500K or quantity of Product X sold.

There may sometimes be situations where you need to create a combination of functions to get the counting done in Excel.

One such case is to count cells that contain text strings.

Text values can come in many forms. It could be:

Have a look at the data set shown below: 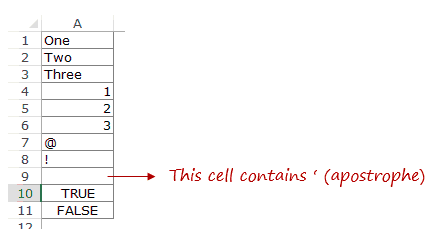 It has all the combinations of text, numbers, blank, special characters, and logical values.

To count cells that contain text values, we will use the wildcard characters:

Count Cells that Contain Text in Excel (including Blanks)

This formula uses COUNTIF function with a wildcard character in the criteria. Since asterisk (*) represents any number of characters, it counts all the cells that have text characters in it.

It even counts cells that have an empty string in it (an empty string can be a result of formula returning =”” or a cell that contains an apostrophe). While a cell with empty string looks blank, it is counted by this formula.

Logical Values are not counted.

In this formula, the criteria argument is made up of a combination of two wildcard characters (question mark and asterisk). This means that there should, at least, be one character in the cell.

Logical Values are also not counted.

The first part of the formula uses a combination of wildcard characters (* and ?). This returns the number of cells that have at least one text character in it (counts text and special characters, but does not count cells with empty strings).

These above examples demonstrate how to use a combination of formulas and wildcard characters to count cells. In a similar fashion, you can also construct formulas to find the SUM or AVERAGE of a range of cells based on the data type in it.

4 thoughts on “How to Count Cells that Contain Text Strings”