In Excel. you can quickly change the case of the text in a cell (to lower case, upper case, or proper case) using text functions.

Below is an example of each type of case:

PROPER function is one of the many text functions in Excel.

What Does it Do?

It takes a string as the input and returns a string where the first letter of all the words has been capitalized and all the remaining characters are in lower case.

When to Use it?

Here are some practical examples to show you how to the PROPER function in an Excel worksheet.

Suppose you have the dataset as shown below:

The names in this dataset are all inconsistent.

You can use the PROPER function to make these consistent (where the first alphabet of each name is capitalized and rest all are small).

The below formula would do this:

In the above formula, I use the ampersand operator to add the text in cells in column A and B, and then PROPER function makes the combined string consistent.

Just like the names, you can also use it to make the address consistent.

Below is an example dataset where the addresses are in an inconsistent format: 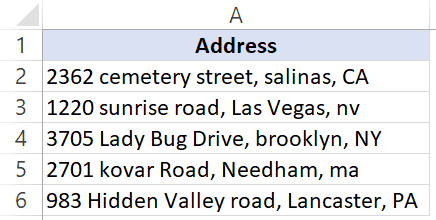 You can use the below formula to make all these addresses in a consistent format:

Note that this formula works perfectly, but if you want the state code (such CA, NV, NY) in upper case, it will not be done with PROPER function only.

In that case, you need to use the below formula:

You can get an idea of how this formula works from this tutorial.

Some useful things to know about the PROPER Function: