How to Use Excel REPLACE Function (Examples + Video)

In this tutorial, I will show you how to use the REPLACE function in Excel (with examples). 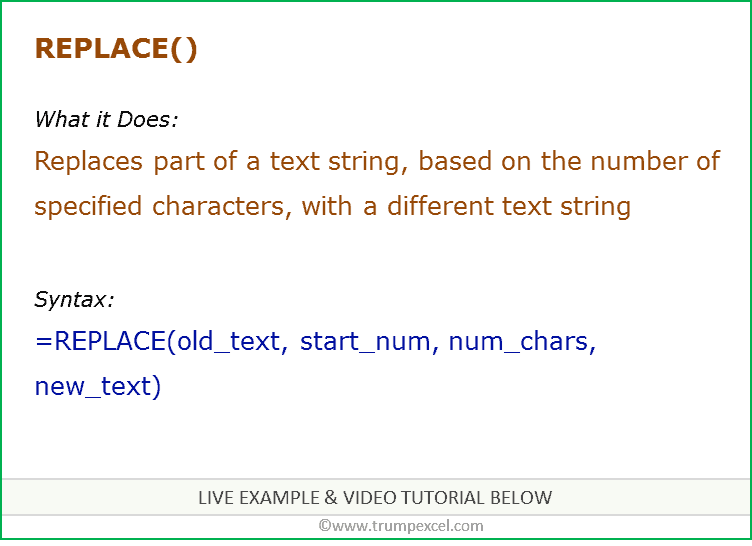 Replace is a text function that allows you to quickly replace a string or a part of the string with some other text string.

This can be really useful when you’re working with a large dataset and you want to replace or remove a part of the string. But the real power of the replace function can be unleashed when you use it with other formulas in Excel (as we will in the examples covered later in this tutorial).

Before I show you the examples of using the function, let me quickly cover the syntax of the REPLACE function.

Syntax of the REPLACE Function

Note that the Start Number and Number of Characters argument cannot be negative.

Now let’s have a look at some examples to see how the REPLACE function can be used in Excel.

Suppose you have the following data set and you want to replace the text “ID-” and only want to keep the numeric part. 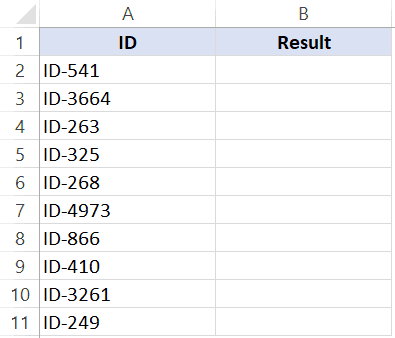 You can do this by using the following formula:

The above formula replaces the first three characters of the text in each cell with a blank. 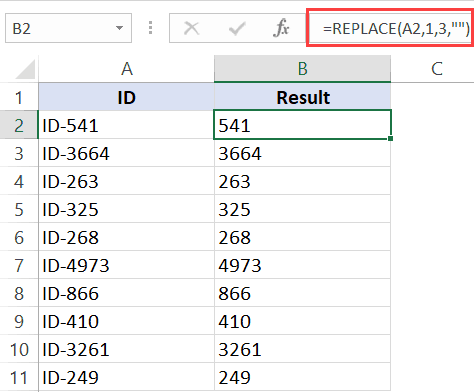 Note: The same result can also be achieved by other techniques such as using the Find and Replace or by extracting the text to the right of the dash by using the combination of RIGHT and FIND functions.

Example 2: Extract the User Name from the Domain name

Suppose you have a dataset as shown below and you want to remove the domain part (the one that follows the @ sign).

To do this, you can use the below formula:

The above function uses a combination of REPLACE, LEN and FIND function.

It first uses the FIND function to get the position of the @. This value is used as the Start Number argument and I want to remove the entire text string starting from the @ sign.

Another thing I need to remove this string is the total number of characters after the @ so that I can specify these many characters to be replaced with a blank. This is where I have used the formula combination of LEN and FIND.

Example 3: Replace One Text String with Another

In the above two examples, I showed you how to extract a part of the string by replacing the remaining with blank.

Here is an example where you change one text string with another.

Suppose you have the below dataset and you want to change the domain from example.net to example.com.

You can do this using the below formula:

Difference between Replace and Substitute functions

There is a major difference in the usage of the REPLACE function and the SUBSTITUTE function (although the result expected from these may be similar).

A good example of this could be when working with email ids or address or ids – where the construct of the text is consistent.

SUBSTITUTE function, on the other hand, is a little more versatile. You can use it to replace all the instances of an occurrence of a string with some other string.