When working with text data in Excel, you may have the need to remove the text before or after a specific character or text string. 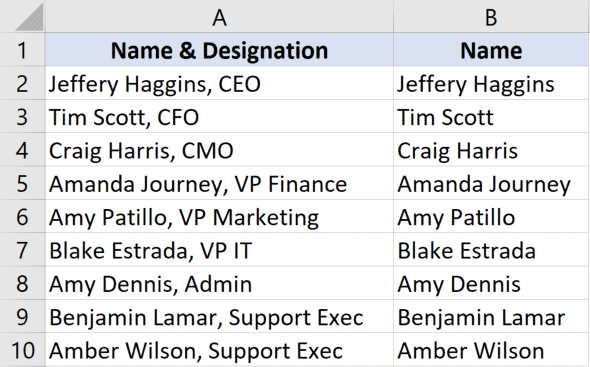 Sometimes, it can be done with a simple formula or a quick Find and Replace, and sometimes, it needs more complex formulas or workarounds.

In this tutorial, I will show you how to remove the text before or after a specific character in Excel (using different examples).

So let’s get started with some simple examples.

Remove Text After a Character Using Find and Replace

If you want to quickly remove all the text after a specific text string (or before a text string), you can do that using Find and Replace and wild card characters.

Suppose you have a dataset as shown below and you want to remove the designation after the comma character and keep the text before the comma. 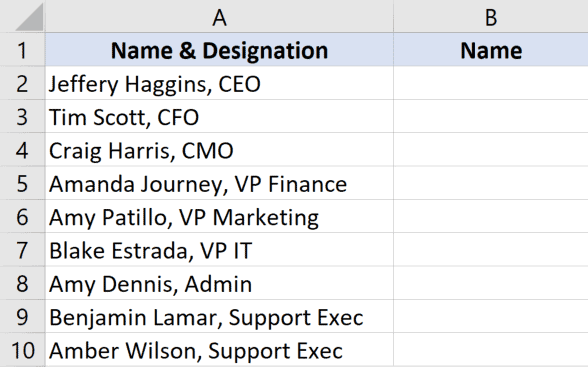 The above steps would find the comma in the data set and remove all the text after the comma (including the comma).

Since this replaces the text from the selected cells, it’s a good idea to copy the text into another column and then perform this find and replace operation, or create a backup copy of your data so that you have the original data intact

* (asterisk sign) is a wildcard character that can represent any number of characters.

When I use it after the comma (in the ‘Find what’ field) and then click on Replace All button, it finds the first comma in the cell and considers it a match.

This is because the asterisk (*) sign is considered a match to the entire text string that follows the comma.

So when you hit the replace all button, it replaces the comma and all the text that follows.

Note: This method works well then you only have one comma in each cell (as in our example). In case you have multiple commas, this method would always find the first comma and then remove everything after it. So you cannot use this method if you want to replace all the text after the second comma and keep the first one as is.

If you need more control over how to find and replace text before or after a specific character, it’s better to use the inbuilt text formulas in Excel.

Suppose you have the below data set Where you want to remove all the text after the comma.

Below is the formula to do this: 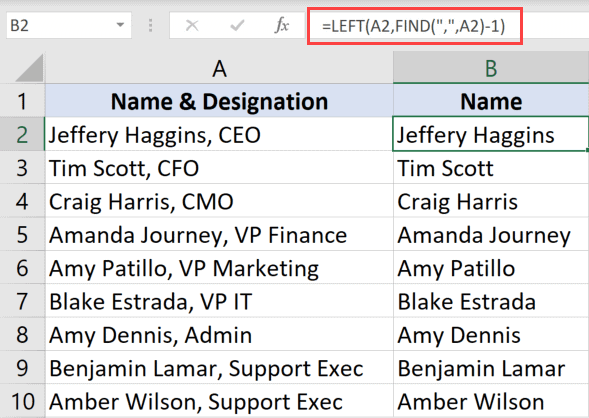 The above formula uses the FIND function to find the position of the comma in the cell.

This position number is then used by the LEFT function to extract all the characters before the comma. Since I don’t want comma as a part of the result, I have subtracted 1 from the Find formula’s resulting value.

This was a simple scenario.

Let’s take a slightly complex one.

Suppose I have this below data set where I want to remove all the text after the second comma. 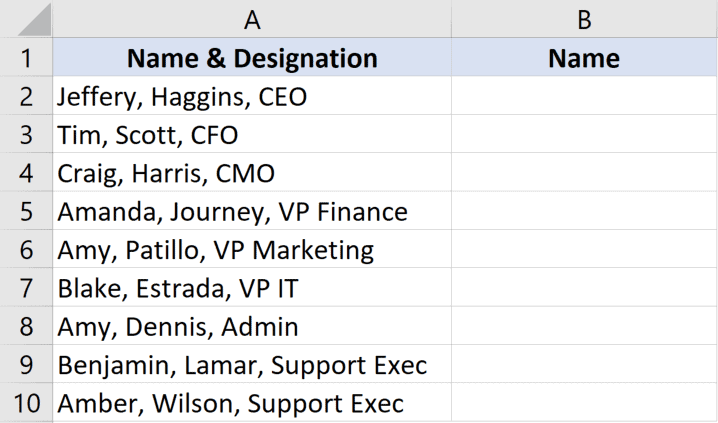 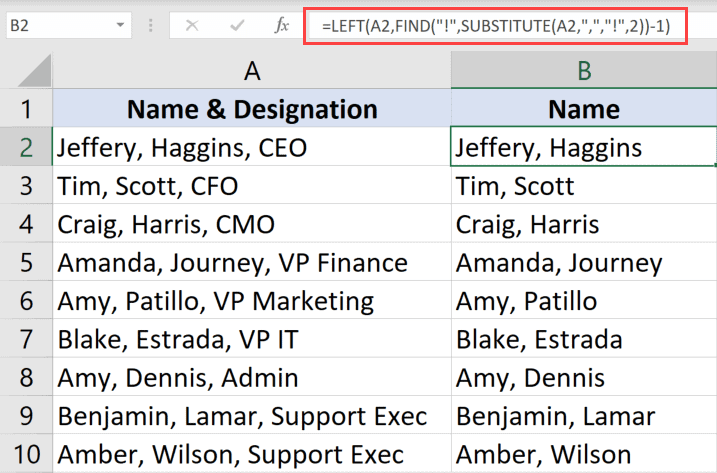 Since this data set has multiple commas, I cannot use the FIND function to get the position of the first comma and extract everything to the left of it.

This position of the exclamation mark is used in the LEFT function to extract everything before the second comma.

So far so good!

But what if there is an inconsistent number of commas in the data set. 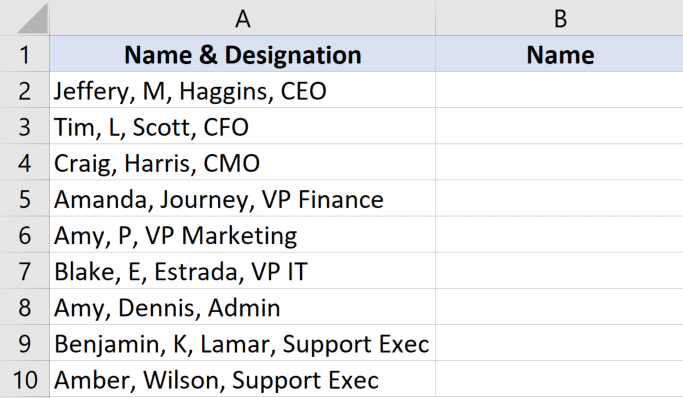 In this case, I need to somehow figure out the position of the last occurrence of the comma and then extract everything to the left of it.

Below is the formula that will do that 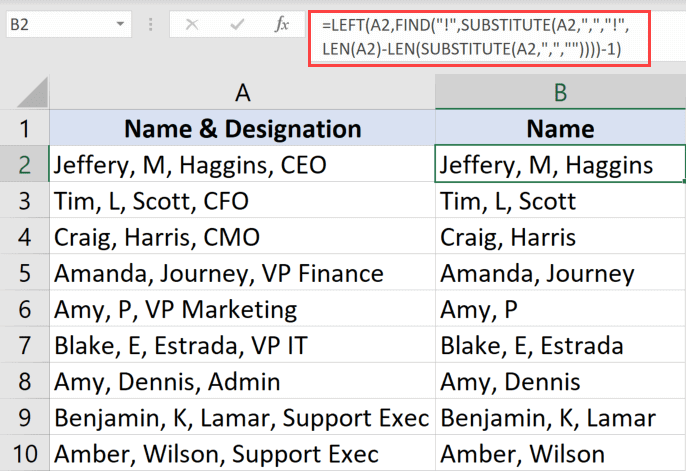 When I subtract these two values, it gives me the total number of commas in the cell.

As you can see in the examples, using a combination of text formulas allows you to handle many different situations.

Flash Fill is a tool that was introduced in Excel 2013 and is available in all the versions after that.

It works by identifying patterns when you manually enter the data and then extrapolated to give you the data for the entire column.

So if you want to remove the text before or after a specific character, you just need to show flash fairy what the result would look like (by entering it manually a couple of times ), and flash fill would automatically understand the pattern and give you the results.

Let me show you this with an example.

Below I have the data set where I want to remove all the text after the comma.

Here are the steps to do this using Flash Fill:

The above steps would give you the result as shown below: 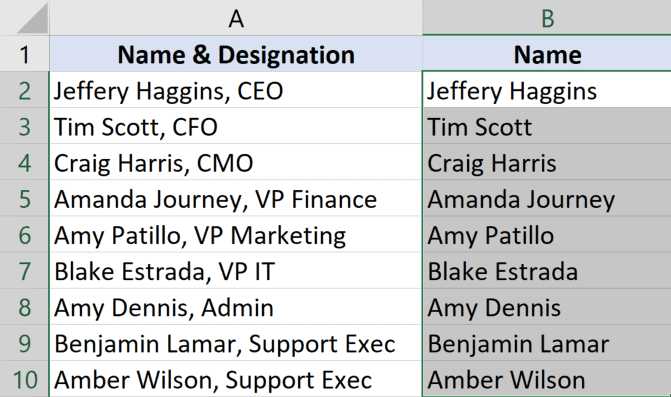 So make sure you double-check your Flash Fill results

The whole concept of removing the text before or after a specific character Is dependent on finding the position of that character.

As if seen above, finding the last occurrence of that character good means using a concoction of formulas.

If this is something you need to do quite often, you can simplify this process by creating a custom function using VBA (called User Defined Functions).

Once created, you can re-use this function again and again. It’s also a lot simpler and easier to use (as most of the heavy lifting is done by the VBA code in the back end).

Below the VBA code that you can use to create the custom function in Excel:

You need to place the VBA code in a regular module in the VB Editor, or in the Personal Macro Workbook. Once you have it there, you can use it as any other regular worksheet function in the workbook.

Below is the formula that will do that: 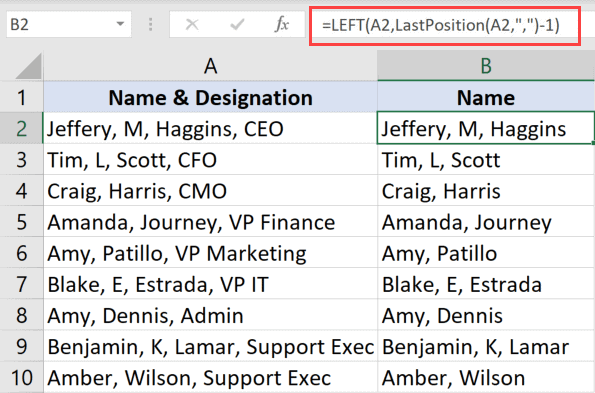 As you can see this is a lot shorter and easier to use, as compared to the long text formula that we used the previous section

If you put the VBA code in a module in a workbook you would only be able to use this custom function in that specific workbook. If you want to use this in all the workbooks on your system, you need to copy and paste this code in the Personal Macro Workbook.

So these are some of the mails you can use to quickly remove the text before or after a specific character in Excel.

If it’s a simple one-time thing, then you can do that using find and replace. what if it is a little more complex, then you need to use a combination of inbuilt Excel formulas, or even create your own custom formula using VBA.