In this Excel tutorial, I will show you how to start a new line in an Excel cell.

You can start a new line in the same cell in Excel by using:

To start a new line in an Excel cell, you can use the following keyboard shortcut:

Here are the steps to start a new line in Excel Cell using the shortcut ALT + ENTER:

While keyboard shortcut is fine when you are manually entering data and need a few line breaks.

But in case you need to combine cells and get a line break while combining these cells, you can use a formula to do this.

If you’re using Excel 2019 or Office 365 (Windows or Mac), you can use the TEXTJOIN function to combine cells and insert a line break in the resulting data.

For example, suppose we have a dataset as shown below and you want to combine these cells to get the name and the address in the same cell (with each part in a separate line):

The following formula will do this:

At first, you may see the result as one single line that combines all the address parts (as shown below).

To make sure you have all the line breaks in between each part, make sure the wrap text feature is enabled.

To enable Wrap text, select the cells with the results, click on the Home tab, and within the alignment group, click on the ‘Wrap Text’ option.

Once you click on the Wrap Text option, you will see the resulting data as shown below (with each address element in a new line): 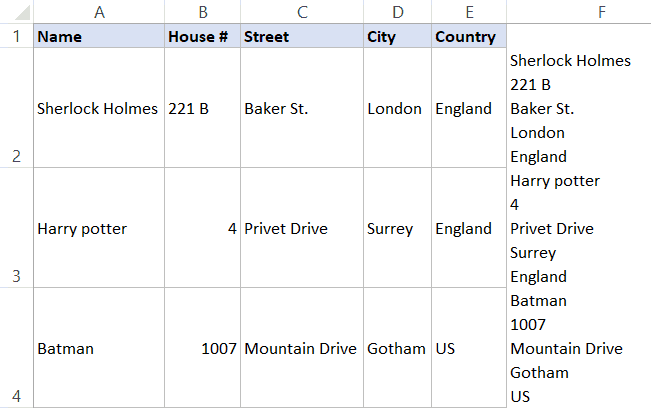 If you’re using Excel 2016 or prior versions, you won’t have the TEXTJOIN formula available.

So you can use the good old CONCATENATE function (or the ampersand & character) to combine cells and get line break in between.

Again, considering you have the dataset as shown below that you want to combine and get a line break in between each cell:

For example, if I combine using the text in these cells using an ampersand (&), I would get something as shown below:

While this combines the text, this is not really the format that I want. You can try using the text wrap, but that wouldn’t work either.

If I am creating a mailing address out of this, I need the text from each cell to be in a new line in the same cell.

To insert a line break in this formula result, we need to use CHAR(10) along with the above formula.

CHAR(10) is a line feed in Windows, which means that it forces anything after it to go to a new line.

So to do this, use the below formula:

This formula would enter a line break in the formula result and you would see something as shown below:

IMPORTANT: For this to work, you need to wrap text in excel cells. To wrap text, go to Home –> Alignment –> Wrap Text. It is a toggle button.