How to Make Negative Numbers Show Up in Red in Excel

Watch Video – Show negative numbers in Red (and in brackets)

If you work with a lot of numbers in Excel, it’s a good practice to highlight negative numbers in red. This makes it easier to read the data.

There are various techniques you can use to highlight negative numbers in red in Excel:

Let’s explore each of these techniques in detail.

Excel Conditional formatting rules are applied to a cell based on the value it holds.

In this case, we will check whether the value in a cell in less than 0 or not. If it is, then the cell can be highlighted in a specified color (which would be red in this case).

All the cells with a value less than 0 would get highlighted in Light Red color with dark red text in it. 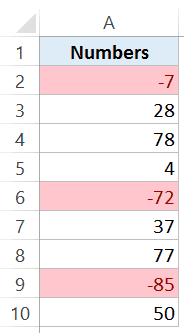 Caution: Conditional Formatting is volatile, which means that it recalculates whenever there is a change in the workbook. While the impact is negligible on small data sets, you may see some drag because of it when applied to large datasets.

Excel has some inbuilt number formats that make it super easy to make negative numbers red in Excel.

When you apply the ‘Number’ format, it adds two decimals to the numbers and makes the negative numbers show up in red. 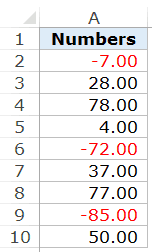 This would automatically add two decimal points and make the negative numbers red with a minus sign.

Note that none of the techniques shown in this tutorial change the value in the cell. It only changes the way the value is displayed.

If the inbuilt formats are not what you want. Excel allows you to create your own custom formats.

This will make the negative numbers show up in red, while everything else remains the same. 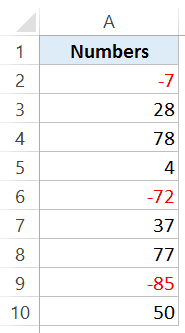 There are four format types that you can customize in Excel:

These formats are separated by a semicolon.

You can specify the format for each type and it will show up that way in Excel.

For using colors, you can specify the color in square brackets at the beginning of the format. Not all colors are supported in custom number formatting, but you can use common colors such as red, blue, green, yellow, cyan, etc.

Similarly, you can specify the format for any of the four parts.

If you mention only:

If you want to learn all about custom number formatting, I would highly recommend Office Help section.