When using lookup formulas in Excel (such as VLOOKUP,  XLOOKUP, or INDEX/MATCH), the intent is to find the matching value and get that value (or a corresponding value in the same row/column) as the result.

But in some cases, instead of getting the value, you may want the formula to return the cell address of the value.

This could be especially useful if you have a large data set and you want to find out the exact position of the lookup formula result.

There are some functions in Excel that designed to do exactly this.

In this tutorial, I will show you how you can find and return the cell address instead of the value in Excel using simple formulas.

The ADDRESS function in Excel is meant to exactly this.

It takes the row and the column number and gives you the cell address of that specific cell.

Below is the syntax of the ADDRESS function:

Now, let’s take an example and see how this works.

Suppose there is a dataset as shown below, where I have the Employee id, their name, and their department, and I want to quickly know the cell address that contains the department for employee id KR256. 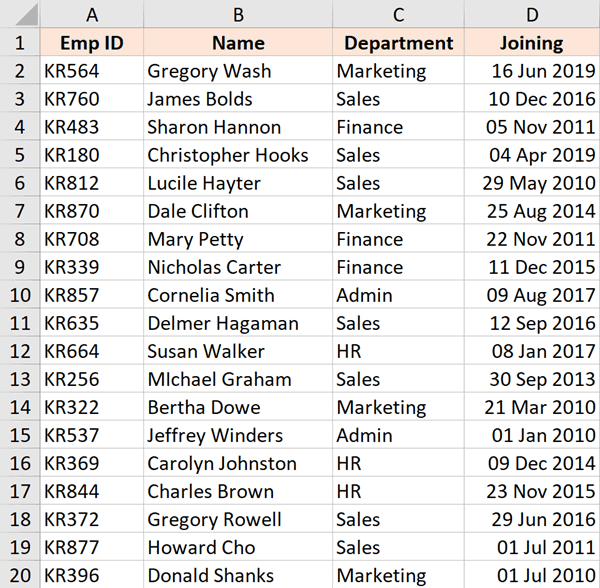 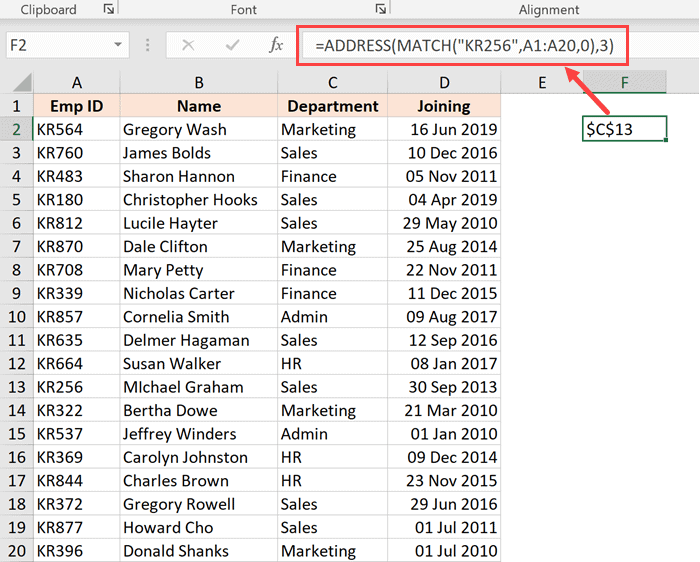 In the above formula, I have used the MATCH function to find out the row number that contains the given employee id.

And since the department is in column C, I have used 3 as the second argument.

This formula works great, but it has one drawback – it won’t work if you add the row above the dataset or a column to the left of the dataset.

This is because when I specify the second argument (the column number) as 3, it’s hard-coded and won’t change.

So, if you have a fixed dataset and need a simple formula, this will work fine.

But if you need this to be more fool-proof, use the one covered in the next section.

While the ADDRESS function was made specifically to give you the cell reference of the specified row and column number, there is another function that also does this.

It’s called the CELL function (and it can give you a lot more information about the cell than the ADDRESS function).

Below is the syntax of the CELL function:

Now, let’s see an example where you can use this function to look up and get the cell reference.

Suppose you have a dataset as shown below, and you want to quickly know the cell address that contains the department for employee id KR256. 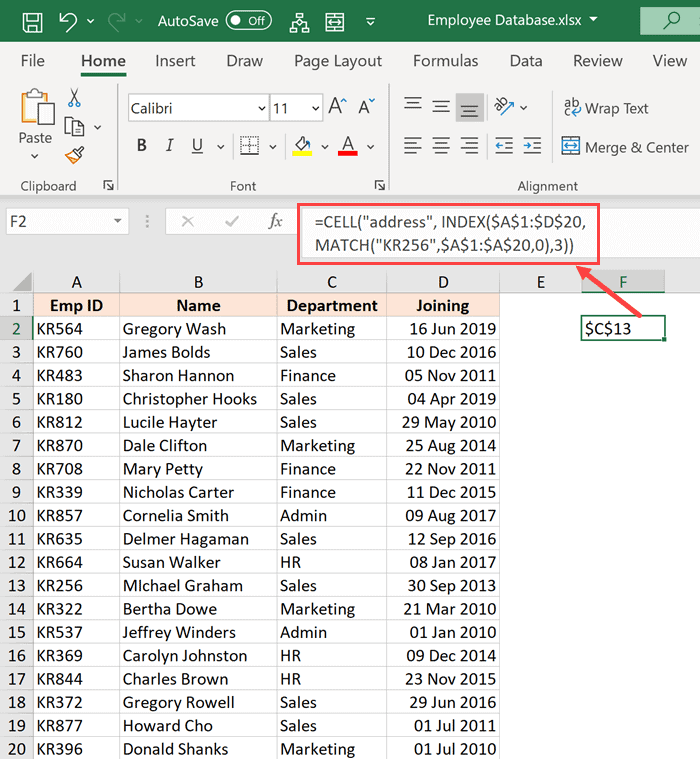 The above formula is quite straightforward.

I have used the INDEX formula as the second argument to get the department for the employee id KR256.

And then simply wrapped it within the CELL function and asked it to return the cell address of this value that I get from the INDEX formula.

Now here is the secret to why it works – the INDEX formula returns the lookup value when you give it all the necessary arguments. But at the same time, it would also return the cell reference of that resulting cell.

In our example, the INDEX formula returns “Sales” as the resulting value, but at the same time, you can also use it to give you the cell reference of that value instead of the value itself.

In this example, that’s exactly what it does.

And the best part about using this formula is that it is not tied to the first cell in the worksheet. This means that you can select any data set (which could be anywhere in the worksheet), use the INDEX formula to do a regular look up and it would still give you the correct address.

And if you insert an additional row or column, the formula would adjust accordingly to give you the correct cell address.

So these are two simple formulas that you can use to look up and find and return the cell address instead of the value in Excel.