When we calculate a simple average of a given set of values, the assumption is that all the values carry an equal weight or importance.

However, in real life, this is hardly the case.

And that’s where Weighted Average comes into the picture.

Here is the textbook definition of Weighted Average:

Now let’s see how to calculate the Weighted Average in Excel.

In this tutorial, you’ll learn how to calculate the weighted average in Excel:

So let’s get started.

Suppose you have a dataset with marks scored by a student in different exams along with the weights in percentages (as shown below): 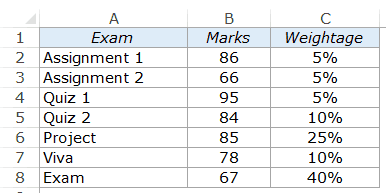 In such a case, you can use the SUMPRODUCT function to get the weighted average of the score.

Here is the formula that will give you the weighted average in Excel:

And finally, it adds all these values.

Here is an illustration to make it clear. 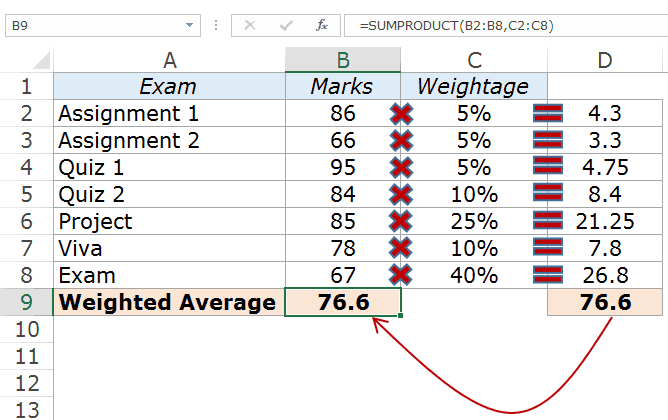 In the above case, the weights were assigned in such a way that the total added up to 100%. But in real life scenarios, it may not always be the case.

Let’s have a look at the same example with different weights.

If I use the same SUMPRODUCT formula, it will give me the wrong result.

In the above result, I have doubled all the weights, and it returns the weighted average value as 153.2. Now we know a student can’t get more than 100 out of 100, no matter how brilliant he/she is.

The reason for this is that the weights don’t add up to 100%.

Here is the formula that will get this sorted:

In the above formula, the SUMPRODUCT result is divided by the sum of all the weights. Hence, no matter what, the weights would always add up to 100%.

Example 3 – When the Weights Need to be Calculated

Suppose you are selling three different types of products as mentioned below:

You can calculate the weighted average price per product by using the SUMPRODUCT function. Here is the formula you can use:

Dividing the SUMPRODUCT result with the SUM of quantities makes sure that the weights (in this case quantities) add up to 100%.

While SUMPRODUCT function is the best way to calculate the weighted average in Excel, you can also use the SUM function.

To calculate the weighted average using the SUM function, you need to multiply each element, with its assigned importance in percentage.

Here the formula that will give you the right result:

This method is alright to use when you have a couple of items. But when you have many items and weights, this method could be cumbersome and error-prone. There is shorter and better way of doing this using the SUM function.

Continuing with the same data set, here is the short formula that will give you the weighted average using the SUM function:

When you hit Control + Shift + Enter, you would see curly brackets appear automatically at the beginning and the end of the formula (see the formula bar in the above image).

Again, make sure the weights add up to 100%. If it does not, you need to divide the result by the sum of the weights (as shown below, taking the product example):