How to Insert Line Break in Excel (Quick and Easy)

A line break in Excel can be used to end the current line and start a new line in the same cell (as shown below).

Notice that in the pic above, Morning is in the second row in the same cell. 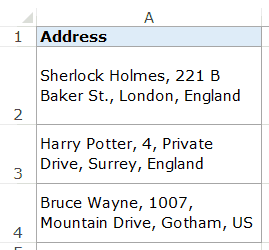 In this tutorial, I will show you a couple of ways to insert a line break in Excel (also called the in-cell carriage return in Excel)

If you only need to add a couple of line breaks, you can do this manually by using a keyboard shortcut.

Here is how to insert a line break using a keyboard shortcut:

The above steps would insert a line break right where you had placed the cursor. Now you can continue to write in the cell and whatever you type will be placed in the next line.

Note that you need the cell to be in the ‘Wrap text’ mode to see the content appear in the next line. In case it’s is not applied, you will see all the text in a single cell (even if you have the line break). ‘Wrap Text’ option is available in the Home tab in the ribbon.

The keyboard shortcut is a quick way to add a line break if you only have to do this for a few cells. But if you have to do this a lot of cells, you can use the other methods covered later in this tutorial.

You can add a line break as a part of the formula result.

This can be useful when you have different cells that you want to combine and add a line break so that each part is in a different line.

Below is an example where I have used a formula to combined different parts of an address and have added a line break in each part. 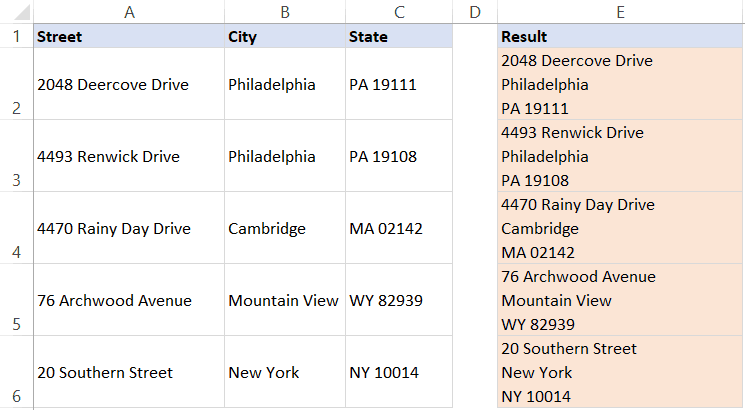 You can also use the CONCAT formula instead of using the ampersand (&) symbol:

And in case you are using Excel 2016 or prior versions, you can use the below TEXTJOIN formula (which is a better way to join cells/ranges)

Note that in order to get the line break visible in the cell, you need to make sure that ‘Wrap Text’ is enabled. If the Wrap Text is NOT applied, adding Char(10) would make no changes in the formula result.

Using Define Name Instead of Char(10)

If you need to use Char(10) or Char(13) often, a better way would be to assign a name to it by creating a defined name. This way, you can use a shortcode instead of typing the entire CHAR(10) in the formula.

So the formula to combine address can now be:

This is a super cool trick!

Suppose you have a dataset as shown below and you want to get a line break wherever there is a comma in the address.

If you want to insert a line break wherever there is a comma in the address, you can do that using the FIND and REPLACE dialog box.

Below are the steps to replace the comma with a line break:

The above steps remove the comma and replace it with the line feed.

Note that if you use the keyboard shortcut Control J twice, this will insert the line feed (carriage return) two times and you will have a gap of two lines in between sentences.

You can also use the same steps if you want to remove all the line breaks and replace it will a comma (or any other character). Just reverse the ‘Find What’ and ‘Replace with’ entries.